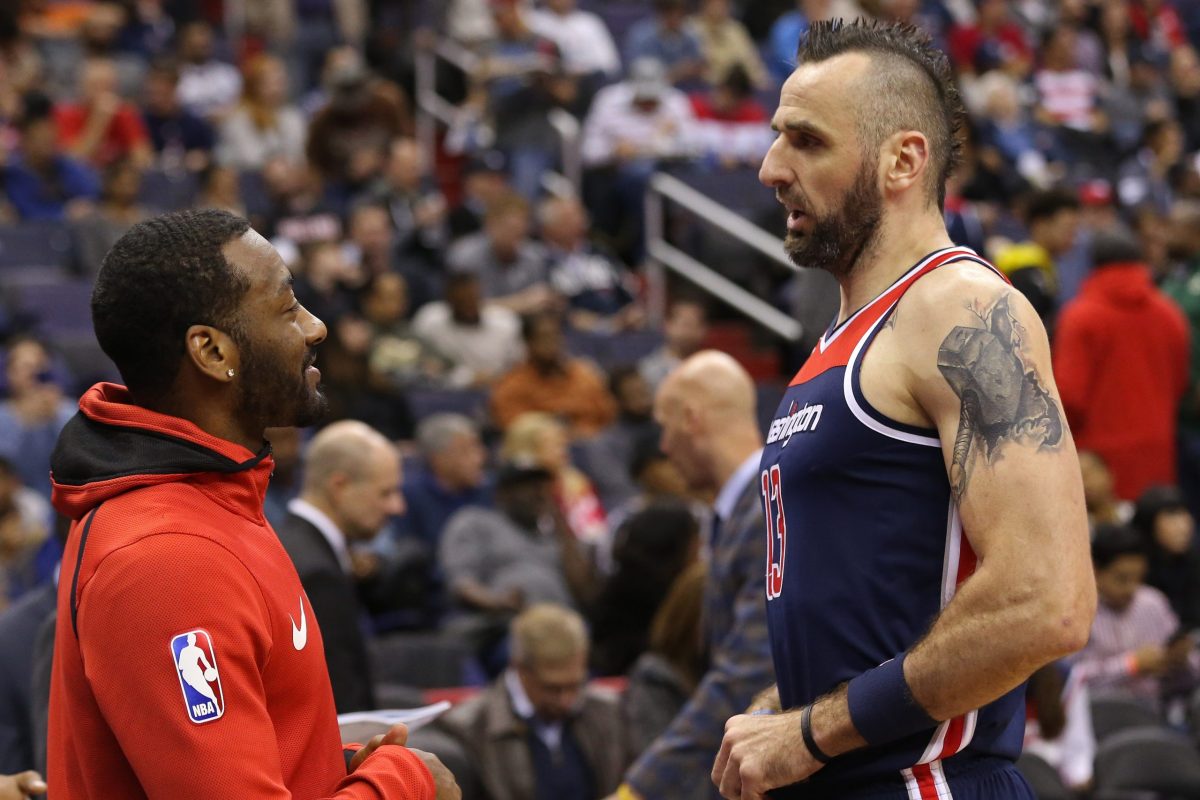 Los Angeles Clippers veteran John Wall recently sent shock waves through the NBA community after admitting that he thought about committing suicide at some point during the past few years.

The former No. 1 draft pick looked back on how difficult life was for him after his professional woes were compounded by the loss of some of his loved ones.

It seems that Wall has overcome his personal struggles and is raring to get back on the court. But his admission “shocked” his former teammate Marcin Gortat.

Gortat recently sat down with Etan Thomas, a former NBA player himself who has become a writer and podcaster for BasketballNews.com. During their discussion, Gortat explained what went through his head after hearing about Wall’s revelations.

“First of all, I was shocked,” Gortat said. “I didn’t know that he was going through so many different issues. I was a witness a couple years ago while we were teammates and there was this little 6-year-old girl, Miyah Telemaque-Nelson, who he had really connected with who passed away from cancer. He had been raising money for her and doing charity work for her, and I remember the big impact her death had on him. He literally broke down during a postgame interview where he dedicated the game to her.”

Thomas and Gortat concurred that some of the flak that Wall has received in recent years is likely due to how inaccurate rumors make the rounds due to the media having to “write something or say something.” For that, Gortat believes that a lot of people owe Wall an apology.

“Yeah and that’s very unfortunate that that happens a lot in the media nowadays, but this is how it is in this league,” stated Gortat. “A lot of people owe John Wall an apology. I understand the media has to write something or say something on their shows that’s controversial and that gets all of the people’s attention because that’s what they are paid to do. But people who know John know that they were unfairly demonizing him. Not that he’s perfect, nobody is perfect. Did he make mistakes? Yes, but everybody makes mistakes. But he is not the person they were making him out to be, and it’s terrible how much that happens.”

Gortat also believes that Wall is one of the best point guards in the league when healthy.

“I definitely agree,” Gortat continued. “So let me say, as someone who played with John Wall for many years: When he is healthy, he is one of the best point guards in the league — hands down. The guy is a beast. I don’t know what Houston was doing with him. That was completely absurd. Here you have a guy of his caliber and you have him sitting at home? Not even on the bench, but at home? I can’t imagine how he felt going through that for [an entire] season? And to have these prominent people in the media vilifying him while he is going through all of this, as he’s dealing with injury after injury and losing his loved ones?”

The fact that Gortat would defend Wall passionately now is certainly heartwarming. After all, it was only a few years ago that they had some beef that was aired out in public.

Their disagreement began when their relationship soured near the end of their time together with the Washington Wizards.

During the middle of the 2017-18 campaign, Wall was recovering from a knee injury when Washington was able to win multiple straight games without its star guard thanks to good ball movement. After the team’s third straight victory without Wall, Gortat sent a tweet that seemingly took a shot at the point guard.

Naturally, Wall took offense to Gortat’s tweet. In what seemed to be a response to Gortat’s message, Wall decided to embarrass the big man by stating that he was benefiting from getting “spoon-fed baskets.”

John Wall on ESPN just said “funny hearing Gortat talking when he gets the most spoon-fed easiest baskets cause of him” pic.twitter.com/U3zOdCCu2x

Wall and Gortat eventually met to settle their beef. The Polish national was eventually traded away to the Clippers in the ensuing offseason and officially retired from professional basketball in 2020.

On the other hand, Wall’s career has been hampered by several injuries. He will have a chance to regain his former glory as a member of the Clippers this season.