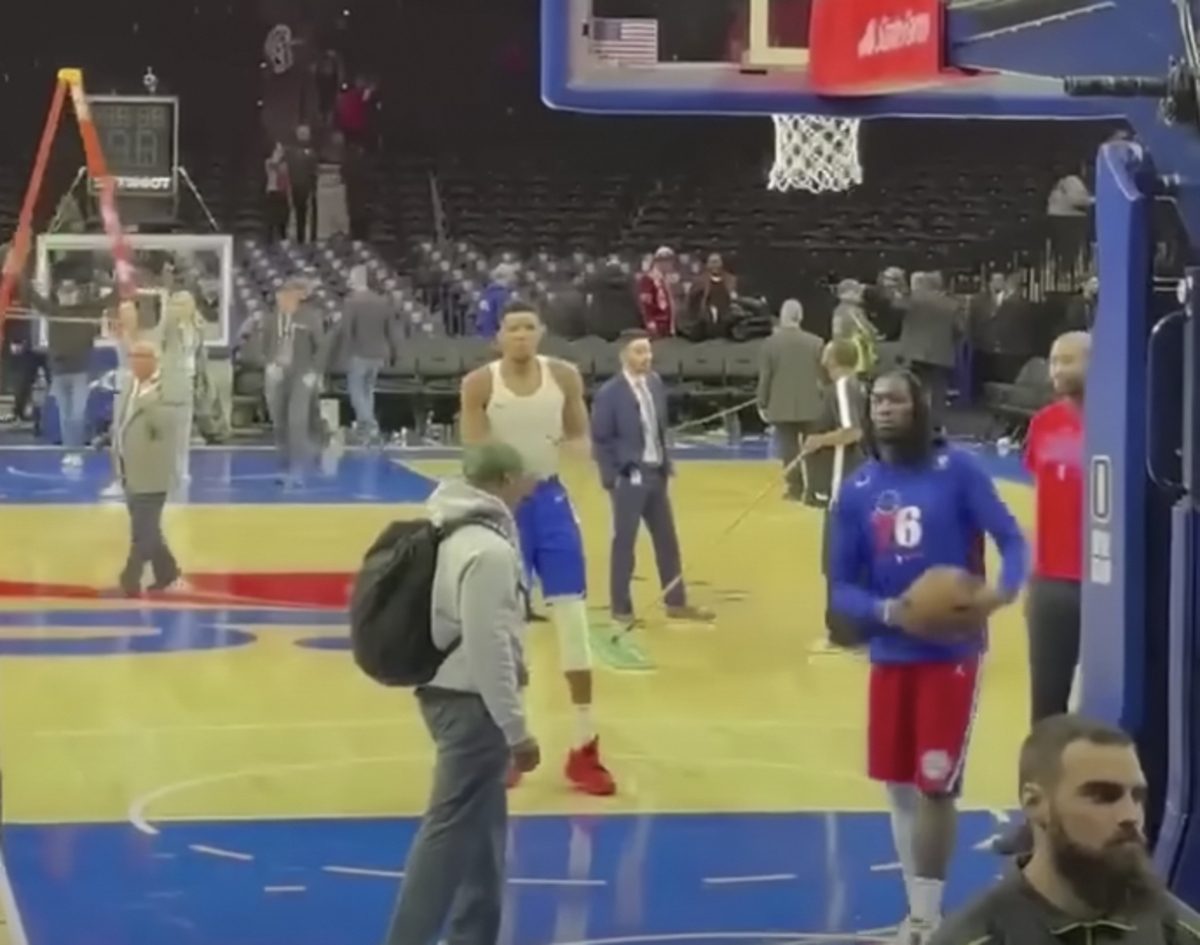 Philadelphia 76ers big man Montrezl Harrell and Milwaukee Bucks superstar Giannis Antetokounmpo are no strangers to getting into physical battles during games on the court.

However, last week, the two took part in a bit of a battle after the final whistle was blown in a 110-102 victory for the 76ers.

Following the game, Antetokounmpo headed out to the 76ers court to take some extra free throws and practice his stroke in front of people who were still present.

Antetokounmpo apparently made seven free throws before Harrell walked over and caught the next ball that went through the net. He then walked off with the ball. The two could then be seen speaking, along with 76ers coach Jason Love, and the interaction clearly bothered Antetokounmpo.

He spoke about the incident with reporters.

“Obviously I had a very bad night from the free throw line,” Antetokounmpo said. “Now, I take pride in getting better every single day. After the game I decided to go try and make some free throws. My goal, every time on the step on the line is to make 10 in a row and I was shooting free throws, I was at seven I think, a player, I don’t want to mention names, and a coach, basically told me to leave the court.

“While behind me there was another space to do their routine. I respect every player. I know some players don’t play now, they want to get some extra work, want to work on their skills and stuff, and I said, obviously we can shoot together.

“They said, they told me no, this is their court, I should leave. I was like, I have three more free throws, I was at seven, I want to try to make 10 in a row. I shot my eighth one. Came and took the ball away from me and I was very surprised. I feel like it’s very unprofessional. I would never take the ball away from a professional athlete when he’s trying to do his job. I feel like we get, fortunately or unfortunately enough, we get paid to do a job, which is to get better and get on the court and perform in the best of our ability and sometime we have bad nights like today and you want to kind of make it up, put that extra work in and hopefully you can have a better night.

“And I feel like sometimes, I think people that are in this business and do what we do should understand that. I understand that if somebody doesn’t get on the court and he wants to get in shape, he gets extra work, you don’t bother them. So, they took the ball away from me and I was very surprised.”

Now, a former NBA player has come forward to issue his own criticism of Harrell. While Antetokounmpo remained somewhat political during his explanation of what took place, former NBA player Eddie Johnson held back very little.

“I just thought it was bush league… Montrezl Harrell… What is wrong with you? You should have been trying to get some advice on how to get your butt off the bench.”

When it comes to Johnson talking about Harrell spending most of his time on the bench these days, he certainly isn’t wrong in that assertion. Harrell is averaging just 10.2 minutes per game this season, the lowest amount since his rookie season.

As for Antetokounmpo, he’s having another season that will likely put him in the MVP conversation. He’s currently putting up 30.1 points, 11.6 rebounds and 5.4 assists per game.

Typically, players of that caliber get a lot of respect around the league, so it is a bit surprising that Harrell tried to assert some kind of dominance after the game.

Clearly, whatever Harrell was trying to do really rubbed Johnson the wrong way. It would not be a surprise to learn that other former and current NBA players feel the same way as Johnson does.

It will be interesting to see if Harrell ends up responding to Johnson in the coming days.