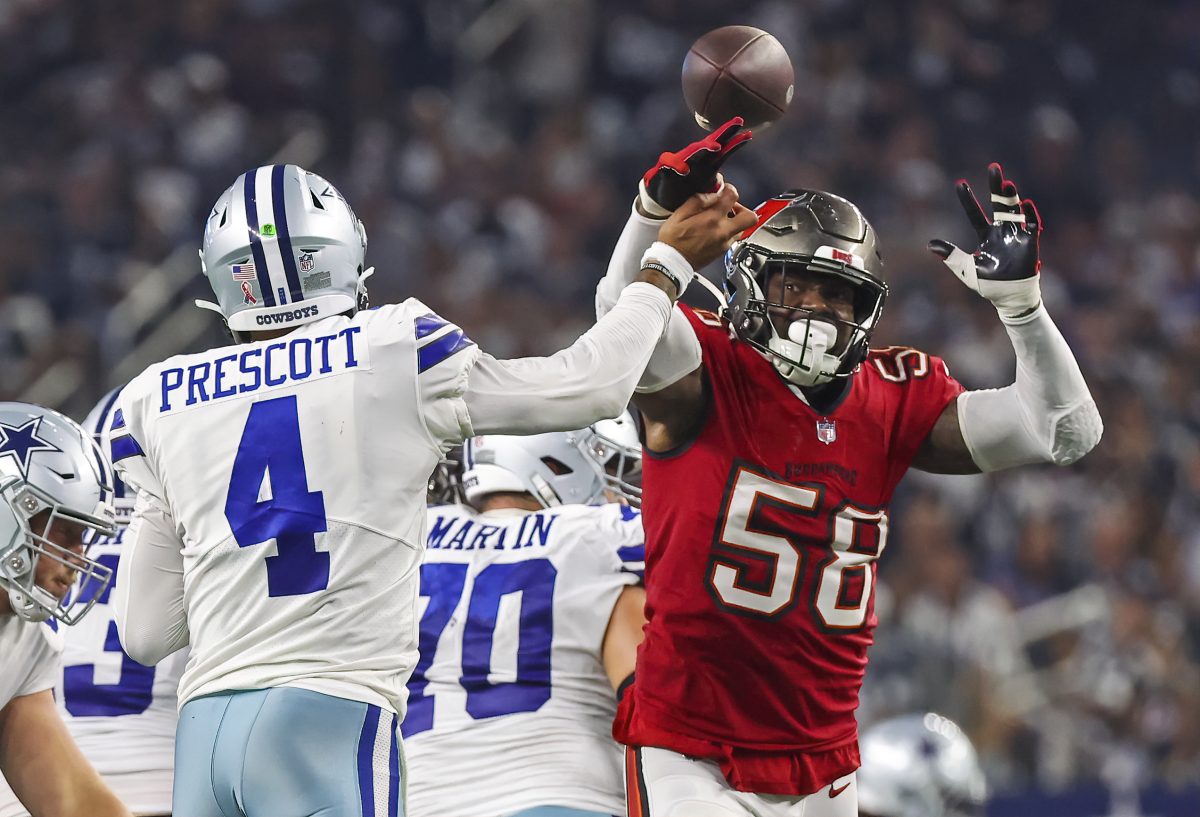 The Dallas Cowboys were dealt a major blow following their Sunday Night Football loss in Week 1 to the Tampa Bay Buccaneers, as quarterback Dak Prescott is expected to miss significant time with an injury to his right thumb.

Prescott reportedly could miss up to eight weeks with the injury and is scheduled to undergo surgery on his thumb.

A timeline from overnight: Cowboys’ QB Dak Prescott is scheduled to have surgery on his right thumb today and is expected to miss 6-8 weeks, multiple sources told ESPN’s @toddarcher.

Prescott appeared to suffer the injury in the fourth quarter of Dallas’ 19-3 loss to Tampa Bay. The Cowboys quarterback had his throwing hand hit by Tampa Bay pass rusher Shaquil Barrett and proceeded to leave the game a few plays later.

Dak's hand got hit several times on this drive, he's having it looked at now w/Cooper Rush in the game #TBvsDAL #CowboysNation #DallasCowboys #NFL pic.twitter.com/Z1IHqZH53X

Following the game, Prescott explained that he didn’t think the injury was too serious when he first got hit.

"I thought I jammed it…next play, realized I couldn't grip the ball."

Dak Prescott talks about the injury to his thumb he sustained in the Cowboys loss to Tampa Bay pic.twitter.com/T130T6XAje

Still, the quarterback appears determined to get back on the field and make the best of his unfortunate injury.

“It’s very disappointing, but injuries happen, can’t necessarily control it, just unfortunate,” Prescott said. “Obviously going to miss some time, not be there for my team and that’s what hurts more than anything, especially after the start we just put out there. Wanted to be able to respond, and not necessarily having that opportunity for several weeks, yeah it’s unfortunate. But I’ll do what I’ve always done anytime adversity comes, take it on head-first and give my best and I’m sure I’ll come out of this thing better.”

Losing Prescott is a major blow to Dallas’ playoff hopes, as the team will now have backup Cooper Rush likely handle the quarterback duties until Prescott returns. The team also has quarterback Will Grier on its practice squad.

Prescott has dealt with serious injuries before, as he missed most of the 2020 season after suffering a scary injury against the New York Giants. The former fourth-round pick missed 11 games that season with a compound fracture and dislocation to his right ankle.

“Obviously it’s not what you want to hear, but it’s not the worst thing that’s happened to me,” Prescott said. “Yeah, it’s just another bump in the road and I’ll keep moving forward. As I said I’ll do everything that I can that I can control to get myself back to get myself better and help this team.”

Prior to exiting Sunday’s game, Prescott struggled against a tough Buccaneers defense. He completed just 14 of his 29 throws for 134 yards and an interception. He also was sacked twice.

Dallas will look to move forward with Rush at quarterback for the time being as it looks to stay alive in the NFC playoff picture.