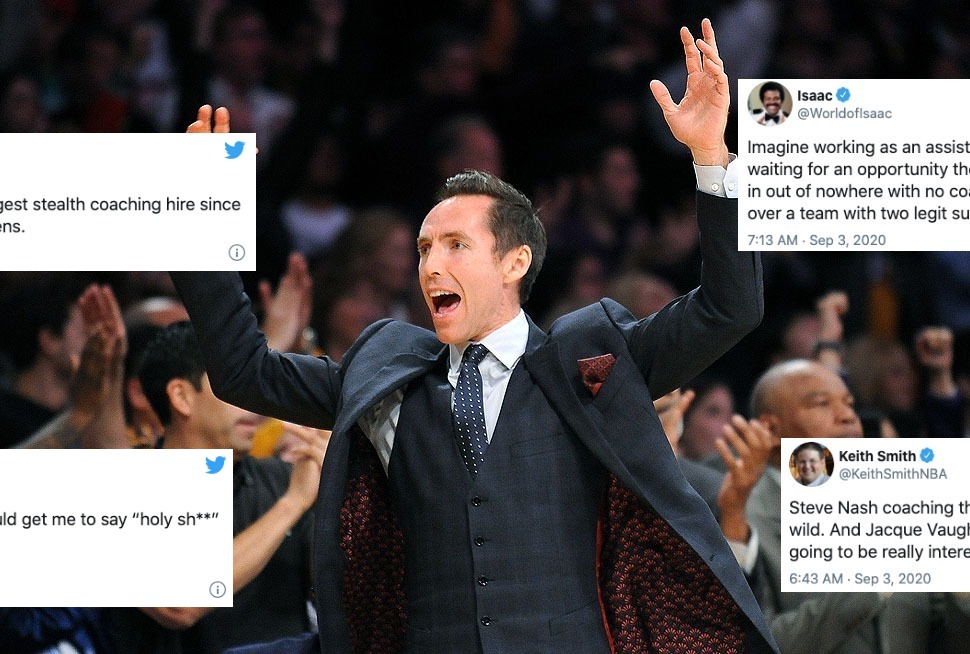 The Brooklyn Nets sent the NBA world into a frenzy when they signed Hall of Fame point guard Steve Nash to be the team’s next head coach.

Nash, 46, worked as a player development coach for the Golden State Warriors and has ties to Nets star forward Kevin Durant.

NBA Twitter exploded following the news that the two-time MVP would be taking over in Brooklyn.

The Steve Nash hiring just did

Steve Nash coaching the Nets came out of nowhere. That's wild. And Jacque Vaughn is staying on to assist him? This is going to be really interesting.

Soooo Steve Nash is the new head coach of the @BrooklynNets … glad I have my season tickets.

The Nets reportedly had their eyes on Nash for a while and made the decision to hire him in May.

I’m told Brooklyn’s decision to hire Steve Nash was made in May.

Team discussed a few options as early as March, including Gregg Popovich. #Nets

He joins a long list of point guards that have gotten head coaching jobs without much coaching experience.

While some have praised the hire, there have been some mixed reviews as well.

Imagine working as an assistant coach in the NBA for years, waiting for an opportunity then BOOM, Steve Nash swoops in out of nowhere with no coaching experience and takes over a team with two legit superstars.

Serious question: what does being KDs player development coach look like and do any of those skills translate to coaching him and 11 others to a title https://t.co/62HWWMc1cU

The Nets were eliminated in the first round of the NBA playoffs this season.

However, the team will have Durant and Kyrie Irving back for next season and will immediately be considered one of the best teams in the NBA.