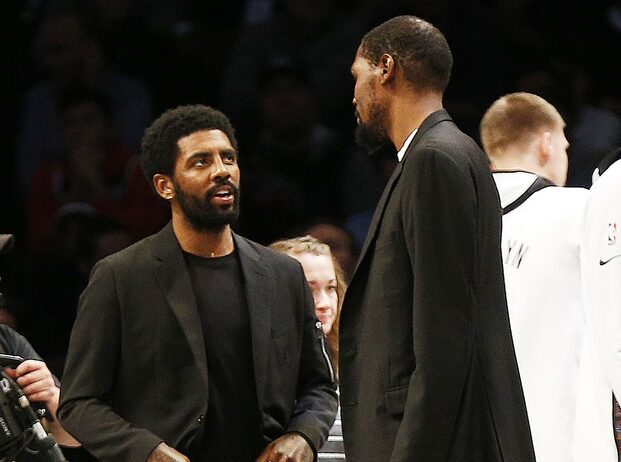 The Brooklyn Nets have one of the most talented duos in the NBA. The combination of Kyrie Irving and Kevin Durant didn’t get seen on the basketball floor this season, but it will during the 2020-21 campaign with Steve Nash as their head coach.

Durant, who sat out the entire 2019-20 NBA season, recently started his own podcast called “The ETCs with Kevin Durant” and shed some light on how he came to know Irving throughout his new platform.

“Me and Kyrie have a mutual friend in Jeff Rogers who worked at Nike. He was our grassroots guy,” Durant said. “Over time once Ky got into the league Jeff just happened to throw us in the text one night.

“We were playing the Cavs (Cleveland Cavaliers)…and me looking at it like we’re No. 1 in the West, we’re playing against a (crappy) Cavs team – this is before I’d seen the light on Kyrie Irving – and I get this text from Jeff and Ky, and Ky was straight up serious. I’m joking around thinking it’s just another game, and Ky was so locked in, like, ‘We’re going to see tomorrow.’ It wasn’t, ‘What’s up little bro, big bro.’ It’s like, ‘Alright I’m going to see what’s up tomorrow.’”

Next season, Irving and Durant are expected to be healthy begin a new era of Nets basketball in Brooklyn. It remains to be seen what kind of player Durant will be coming off an Achilles injury that usually ends most NBA careers.

Although Durant’s recovery has some skeptical of whether he can return to form, the Nets still have high expectations even with a rookie head coach at the helm in Nash. Brooklyn could become the team to beat in the Eastern Conference if this duo lives up to its potential.