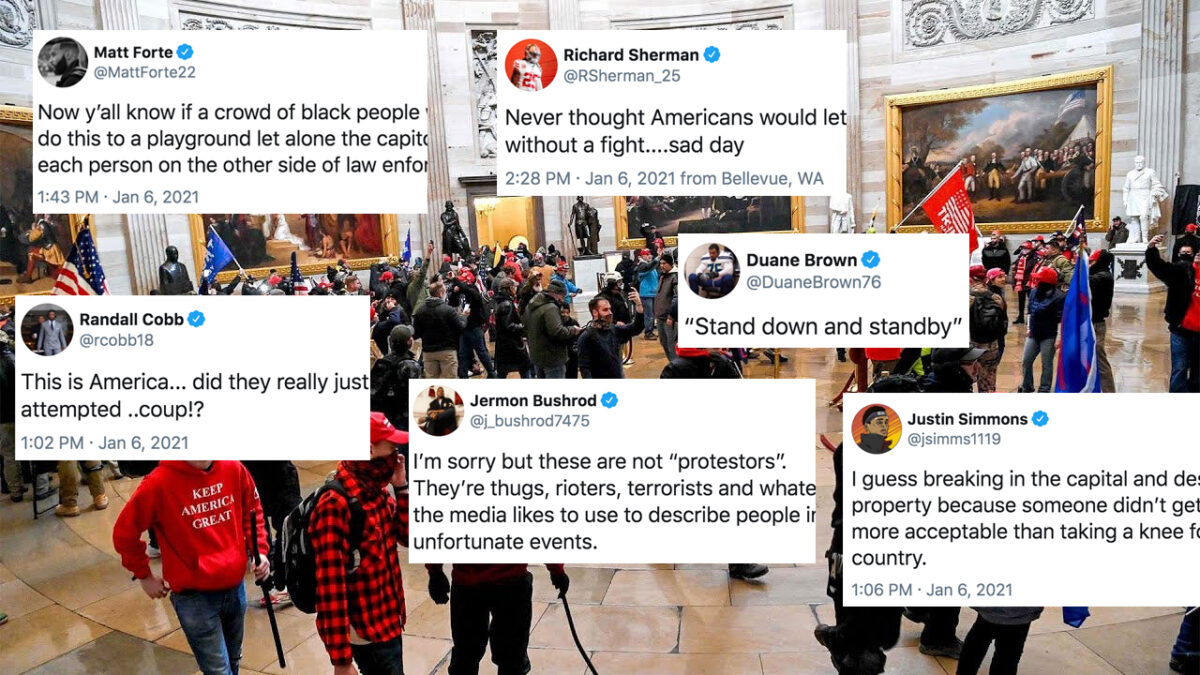 The images of supporters of President Donald Trump storming the U.S. Capitol resonated across the world, with a number of NFL players offering blunt opinions on the shocking event.

The reason why those supporters took such an unprecedented action was connected to the otherwise standard certification of Joe Biden as the next president of the United States. The mayhem that ensued forced the politicians who were set to vote on the issue into lockdown.

That chaos and Trump’s controversial role in the matter didn’t escape the notice of many NFL players, who either responded by using social media to express themselves or answering media queries.

Never thought Americans would let terrorists into the capital without a fight….sad day

I guess breaking in the capital and destroying government property because someone didn’t get elected in office is more acceptable than taking a knee for injustices in our country.

“Stand down and standby” https://t.co/AECT4Fty8G

Today was acts of terrorism, and should be treated as such!

This is America… did they really just storm the Capitol in an attempted ..coup!?

The Capital Building. HOW🧐🧐🧐🧐👀

I’m sorry but these are not “protestors”.
They’re thugs, rioters, terrorists and whatever other words the media likes to use to describe people in these type of unfortunate events. https://t.co/1k9F6KwEmt

Oh they thought it was sweet cause they had the American flag..I hope you take notice America, these folks dangerous.

This is how the world starts off ‘21? Beyond crazy.

Deescalate and Talk to them? Did they start new training? Or was this always what they are taught to do? 🤔 https://t.co/ajUhQLT21N

Now y’all know if a crowd of black people were to gather and do this to a playground let alone the capitol it’d be a wrap for each person on the other side of law enforcement!

2021 is starting off wild already

Y’all… President Trump told them to “Stand back and stand by” Why are we surprised. A mob of all white Trump supporters stormed the White House. None of them were harmed. Gangsters, mobsters, terrorists… this is embarrassing. Truly.

These dudes taking pics inside the capitol this is comical

Some of the NFL commenters also took note of Trump’s previous criticisms about NFL players kneeling during the playing of the national anthem or his emphasis on the concept of law and order.

Where is the law & order now? The National Guard?

Stop saying stick to football like that’s our only purpose on this earth. We (football players) have every right to speak on whatever we feel no matter the situation.

In the case of Seattle Seahawks quarterback Russell Wilson, he sought to offer a plea for unity in his remarks.

“What we do need to do is come together as a nation,” Wilson said. “It has to start with love. It has to start with people coming together. Our leaders and everything else in our country. We need safety, we need protection for our children and people.”

The debate and vote to officially certify Biden is expected to come either Wednesday night or early Thursday morning. That will mean that he’ll then replace Trump on Jan. 20 when he takes the oath of office.