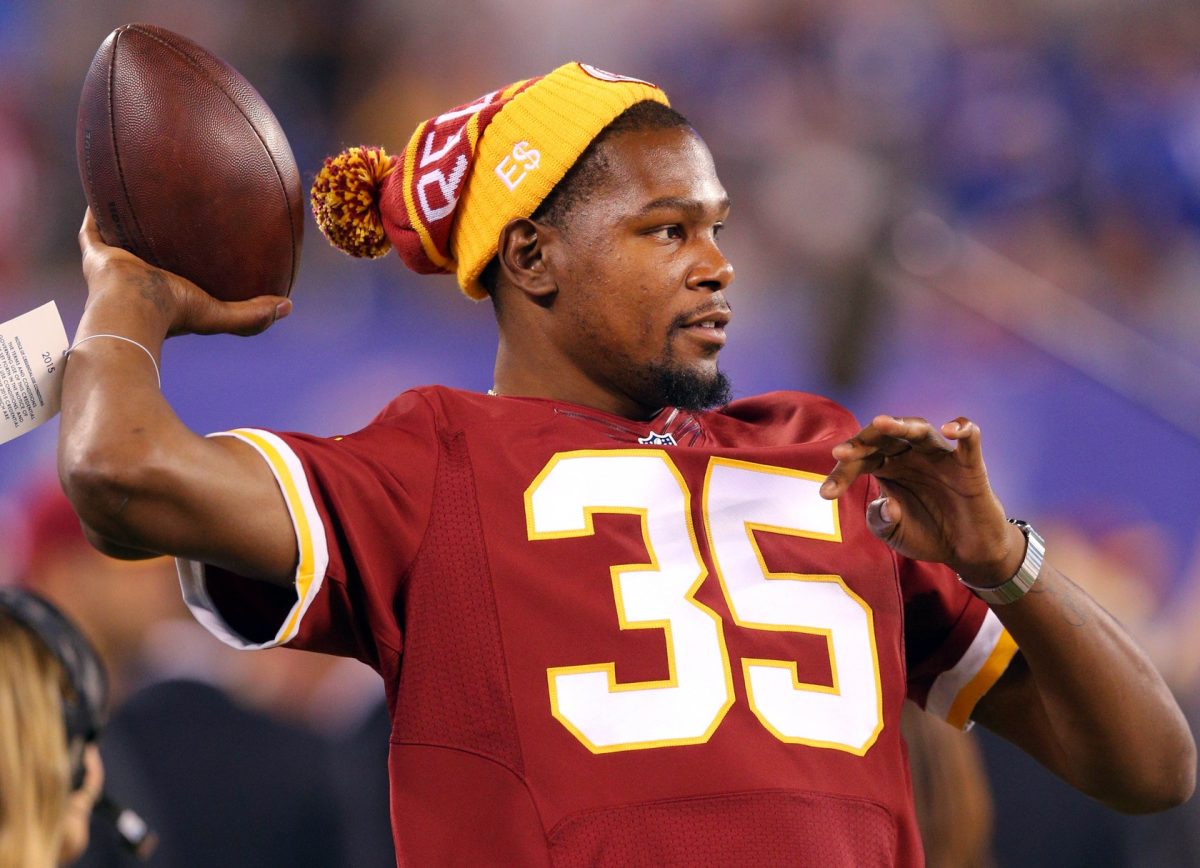 Kevin Durant is a longtime fan of the Washington Commanders franchise. He might have an opportunity to be a part of its ownership group if the current owners decide to sell it. The Brooklyn Nets star addressed the possibility of owning a piece of the NFL team.

“In a perfect world, I would be a part of it,” Durant told ESPN. “I would love to do it. I would love to give a little bit of my money to be a part of the Commanders, but we’ll see. Hopefully it’s somebody nice. I heard [Amazon CEO Jeff] Bezos and Jay-Z, but you never know.”

It seems that Durant was surprised that Dan Snyder is exploring his options in regards to selling the franchise. After all, the American businessman has owned the team (then called the Washington Redskins) since 1999 when he purchased it for $800 million. At the time, it was the most expensive transaction in the history of sports.

“I mean, how long has he had it now — 20-something years?” Durant said. “He’s probably the only owner I’ve known since I’ve been alive for the Redskins/Commanders. So it’s definitely shocking to see him put them up because it’s his baby. NFL teams are precious, they’re important.

If Durant indeed chooses to be a part of the Commanders ownership group, he will likely need to shell out a large amount of money. According to NFL insider Ian Rapoport, the sale could reach a hefty sum of $7 billion.

On the #Commanders possible sale: My understanding is that number could reach $7B with a timeline of the March league meeting if all goes well. https://t.co/qWa4LxE0zy

It’s interesting that the franchise is valued as such, given that it has not had a winning season since the 2016 campaign. Still, the Commanders have a huge market and are supported by a lot of people in the nation’s capital. In addition, they have solid foundational pieces that could make them a force to be reckoned with in the coming seasons.

As for Durant, while he may be keeping tabs on the potential sale of the Commanders franchise, he is likely focused on helping the Nets this season.

The Washington, D.C. native is having a solid start to the 2022-23 campaign despite the drama surrounding the Nets organization. He is averaging 31.5 points, 6.2 rebounds and 4.8 assists per contest.

Brooklyn might need more from him as the team is currently without his running mate Kyrie Irving, who was recently suspended for at least five games for his recent actions. Additionally, the Nets’ supposed third star, Ben Simmons, has been playing horribly so far.

Other teams are reportedly ready to reengage on Durant trade talks with the Nets.