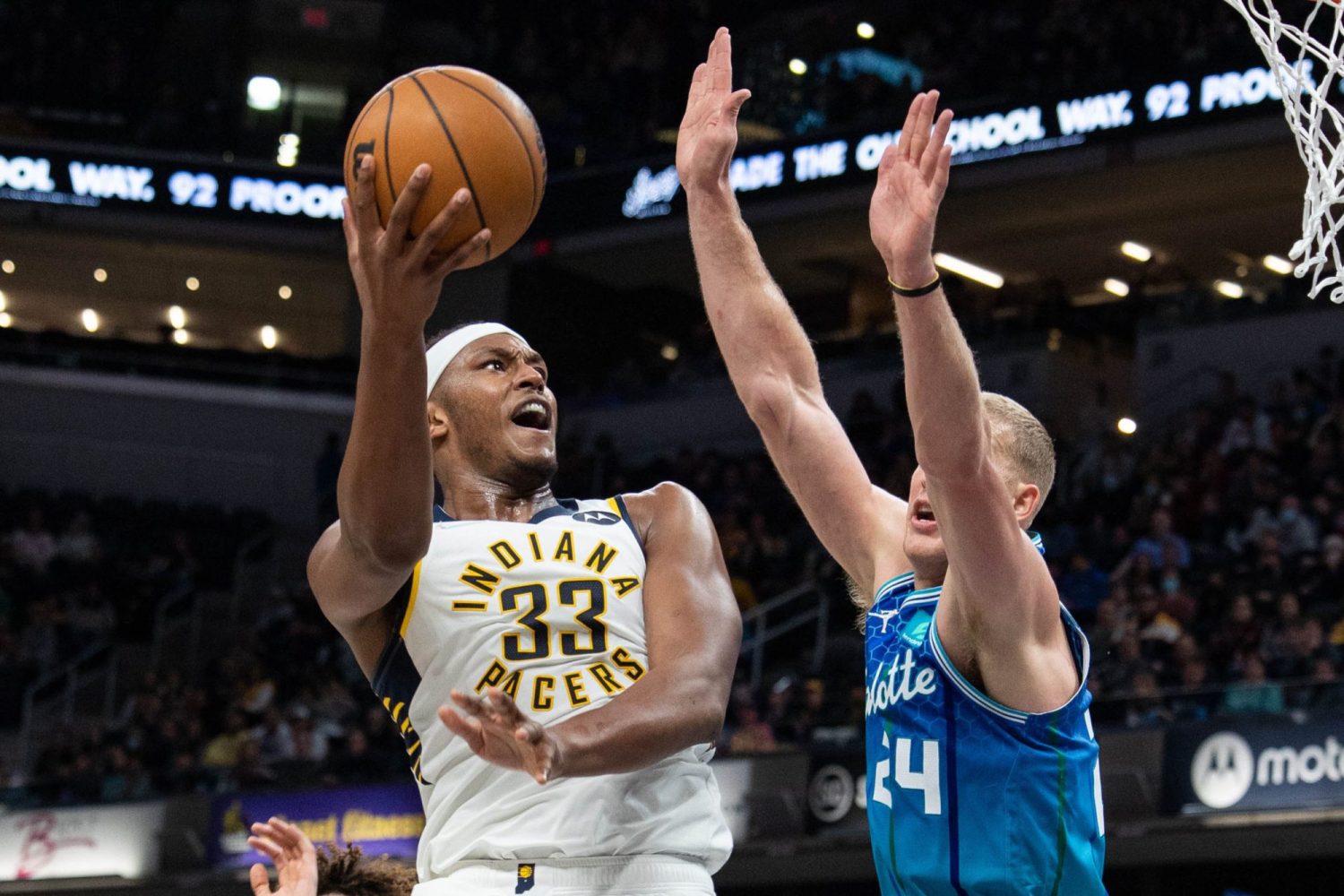 The Charlotte Hornets have come up short in the play-in tournament in each of the last two seasons, and it may be time for the team to explore an upgrade to the roster in the offseason.

The Indiana Pacers could be an interesting trade partner for the Hornets if the team decides to move center Myles Turner.

The Hornets played Mason Plumlee at center for the majority of the 2021-22 season, but there are things that Turner can do on both ends of the floor that would make him a major upgrade.

Charlotte is close to being a playoff team in the Eastern Conference, and it has some impressive young talent in Terry Rozier, LaMelo Ball and Miles Bridges. However, if the Hornets want to maximize their young players’ ceilings, they need to pair them with a center that will help fix some of the holes in the team’s roster.

Here are three reasons why Turner is a perfect trade target for the Hornets to pursue in the offseason.

The Hornets have one of the most dynamic offenses in the NBA, as Bridges, Ball and Rozier are all elite perimeter scorers. In addition to that trio, the Hornets have strong wings and forwards such as Kelly Oubre Jr., Gordon Hayward and P.J. Washington that allow them to mix and match different lineups.

Despite that, Charlotte’s defense held it back in a major way in the 2021-22 season. The Hornets were the No. 22 team in the NBA in defensive rating, and they allowed 114.9 points per game.

Even though Plumlee is a solid player, he doesn’t have the defensive or shot-blocking ability that Turner possesses.

By trading for Turner, the Hornets would instantly improve their interior defense, which would be huge since the team allowed 48.1 points per game in the paint in the 2021-22 season. It finished 20th in the league in that category.

The Hornets can play at an elite level of offense for as long as they want, but until the team’s defense catches up, it is going to struggle to be a playoff-caliber team.

Plumlee is a serviceable offensive player, but he lacks the ability to stretch the floor, and he shot a putrid 39.2 percent from the free-throw line in the 2021-22 season.

Turner, on the other hand, is a solid 3-point shooter who also possesses the athleticism to make opponents pay at the rim.

Adding a player that can stretch the floor and open up the lane for athletic scorers like Ball and Bridges would make the Hornets an even scarier team on the offensive end. Plus, Turner is an upgrade in the paint over Plumlee, as he would be a perfect lob threat in pick-and-roll action with Ball.

The Hornets would lose a little of Plumlee’s passing with Turner as the starting center (Plumlee averaged 3.1 assists per game in the 2021-22 season), but it’s something the team should be willing to sacrifice for a far more dynamic threat on offense.

The first two reasons showcase why Turner would help the Hornets now, but the former first-round pick would also help the team going forward.

The Hornets have come just short of the playoffs in their first two seasons with Ball on the roster, and he is one of the league’s rising stars. However, the Hornets have to show they can build a competing roster around him to help keep him with the team for the long term.

Sure, Ball can’t just get up and leave, but it is in the franchise’s best interest to show its young star that it will do anything it takes to provide him with the best supporting cast available. Turner would fit the roster almost perfectly.

The Hornets have played well enough to make the play-in tournament, only to see their playoff hopes dashed by better teams. If Charlotte wants to take the next step, Turner is a perfect player to try to bring into the fold ahead of the 2022-23 season.